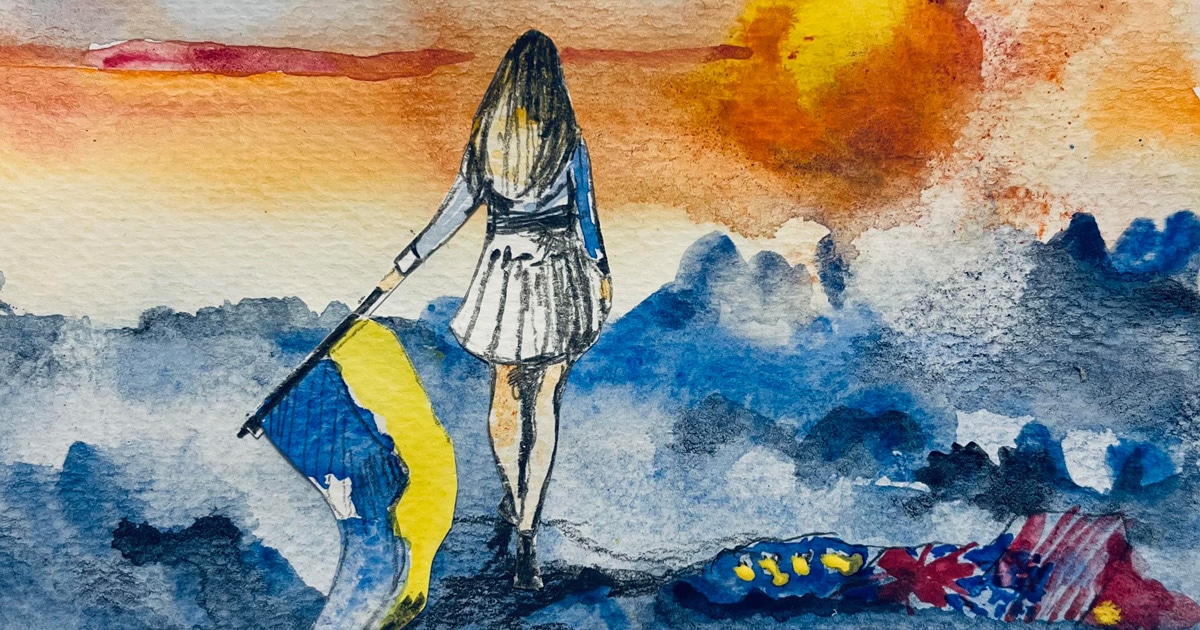 Four Ukrainian women in the United States discuss that how Russian invasion has impacted their job and inspired them to support friends and family. In this article, we share the story of these Ukrainian artists in the US based on recent Russian invasion.

Russia invaded Ukraine six weeks ago, sending heavy weaponry and soldiers in to inflict misery and ruin on a peaceful nation that just proclaimed independence 31 years earlier, in August 1991. The conflict in the region has been smoldering since February 2014, as Russia began massing at Ukraine’s borders in response to the Dignity Revolution.

Ukrainian artists in the US explain how the war between Russia and Ukraine, influenced their job and inspired them. Let’s see who they are.

Inga Bard, a San Francisco-based artist, was creating work throughout that chaotic period. Bard was born in Odessa, Ukraine, in 1987, and her first recollections are of the post-Cold War rebuilding and her family’s struggling to keep food on the table. She describes it as the wild west. She was a child when the Soviet Union fell apart, and the little information she has about the lifestyle before then comes from her grandparents’ stories. People who were well-off and members of the Communist party remember those days fondly. Others had family members who were subjected to practically serfdom as a result of the Great Famine.

In 1997, Bard and her family moved to the United States. She co-founded two public art programs, Painted the Void and Art for Civil Discourse, and is presently the artistic director of MobileCoin, where she co-founded the MobileCoin Art Prize with curator Andrew Berardini, which was initially shown at the NADA Miami art market last December. MobileCoin, which was formed by Bard’s business partner Joshua Goldbard, is now working on a matching contribution campaign for non-profits gathering funds for humanitarian aid efforts in Ukraine, such as Ukrainian Students for Independence.

Yulia Pinkusevich, a San Francisco-based artist, likewise feels a fresh closeness to her Ukrainian ancestry. Her continuing project Isorithm (2018-present) is based on a Cold War-era military document that describes the effects of nuclear weapon explosions. These works have helped her to channel her tremendous sympathies and feelings into something constructive. She adds that it has been a source of great comfort to her during this difficult time. Karin Brewer, the curator in charge of the Fine Arts Museums of San Francisco’s Achenbach Foundation for Graphic Arts, purchased Casualty, Isorithm 2 at the deYoung Museum’s Open display in 2020.

Pinkusevich was born in the Soviet Union’s Kharkov, now Kharkiv, Ukraine, in 1982. In 1991, her family received refugee status and relocated to Brooklyn, New York. Her father is a Ukrainian Jew, while her mother is a Siberian Russian. Silencing the Cacophony, a large-scale painting installation inspired by Ukraine’s Maidan revolt, was shown at Kent Fine Art, the Ukrainian Museum in New York, and the Ukrainian Institute of Modern Art in Chicago in 2015. 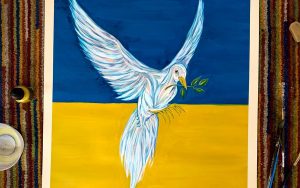 Natasha Dikareva, a ceramic artist, has comparable resilience tales that are also tinged with sadness. In the 1990s, she moved to the United States, staying in San Francisco until migrating to the Eastern Coast during Covid-19. Her relatives, including her uncle, cousin, and his wife, and also numerous acquaintances, have opted to remain in Kyiv, where she was born and reared. Dikareva’s figurative artworks have taken a gloomy turn, with once-serene features now groaning in agony and full of holes as if smashed or shot to bits, which is maybe predictable.

Yelena “Skye” Makarczyk, a multimedia artist and filmmaker residing in Los Angeles, experienced the war’s build-up firsthand. In November 2021, she made the last visit and It was terrible. She now waits with bated breath for word from relatives and friends to make sure it is safe. She says that lots of her friends are fighting against Russia now and many of them are filmmakers. One of her friends is a railroad employee who has taken up guns. she gets information from them on a regular basis and keep in close contact with them. 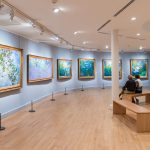 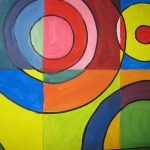